BUY A FULL PAGE AD IN OUR "KOBE" COLLECTOR'S EDITION 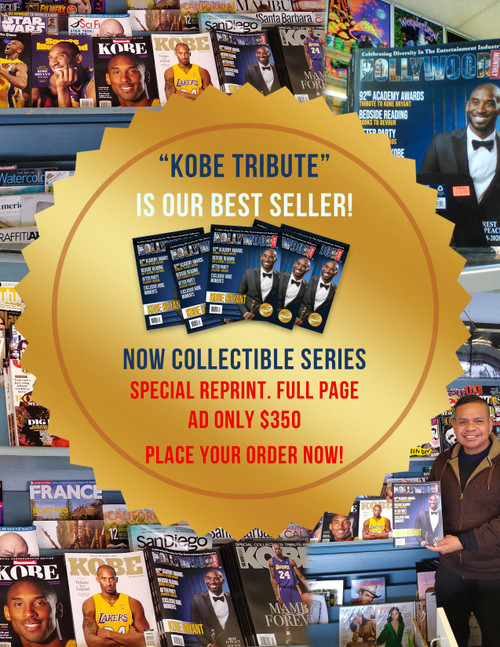 BUY A FULL PAGE AD IN OUR "KOBE" COLLECTOR'S EDITION

The world still miss Kobe and to celebrate the support we have received from his many fans Hollywood Weekly is proud to announce our "KOBE TRIBUTE" is being reprinted as a COLLECTOR'S EDITION. While other publishers have more expensive options are rates are very affordable. This is YOUR OPPORTUNITY to showcase your business in this wonderful keepsake edition.

https://soundcloud.com/ronald-e-childs-859187179 There’s a new song ascending into the heavens above Hollywood’s horizon, crowning the many touching tributes recently paid to late and legendary basketball superstar Kobe Bryant, who sadly, and tragically transitioned this life on January 26th at just 41 years of age, along with his 13-year-old daughter Gianna, and seven other souls.

The new musical track, titled “Mamba, We Love You,” co-composed by Annalea Diamond and Tony “Raheem” Thomas, both of Los Angeles, has been released for airing to radio and digital media nationwide. The song is beautifully crafted, artfully composed and lovingly performed, and everyone involved in bringing it to life view it as more than just their talents on display, but more so a divinely received gift.